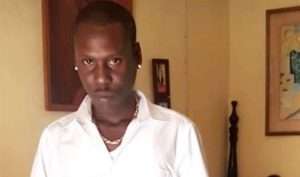 (JAMAICA STAR) — All his life, 35-year-old Radre ‘Kayle’ Hunter dreamt of one day being called ‘Daddy’.

However, only a week after this became a reality, he was tragically ripped away from his baby girl. It is reported that about 5:17 p.m. Tuesday, residents saw a body in an open lot on Henley Road, Olympic Gardens, Kingston 11, with the left arm severed and head bashed in. It turned out to be Hunter.

Fighting to hold back her tears, his common-law wife of seven years, Meliesa Dewar, recounted Hunter’s reaction as he anticipated the birth of his first child.

“When him find out that me pregnant it was one of the best time of his life, and when the baby born, he was so excited, because from we in the relationship he always wanted a child,” Dewar told THE STAR. “When me reach home from the hospital him make sure the place well pretty. Him paint it in full white and decorate it and say to me, ‘Babe, me love how me baby a come home, she nuh in a nursery, she nuh sick, it’s a blessing’.”

Hunter’s last moment with his daughter was on Sunday afternoon at their Kingston home.

“When anybody bathing her, she tend to make fussy noise, and the Sunday when he was wiping her off the baby never make a sound,” she said. “Him just a wipe her and she just a look on him a pamper her and he was so happy. Me never expect this coming.”

‘BABE, ME SOON COME’
“A night-time we do shift work with the baby so me call him to come home and tell him to buy a water for the baby, and him say ‘Babe, me soon come’,” she said. “When me see curfew time and him nuh come in me get more concerned because that is unlike him an done just a call and nothing.” Dewar has been fighting to remain strong for their baby girl.

“It just sad that he wanted a baby for so long and now him gone, but I have to be strong because me know him want me to do the best for her,” she said as tears welled up in her eyes.

“Me feel me belly move when me see me son lay down dead,” she said. “Him just get him baby and them take him away from her. She a just days old, me just don’t understand why. From when me nuh eat or sleep but I have to stay strong for him daughter. At least me can look on her and say he left something behind and she look just like him.”