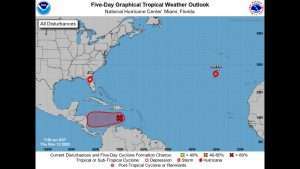 (LOOP NEWS CARIBBEAN) – The US National Hurricane Centre (NHC) said a tropical wave located over the central Caribbean Sea is gradually becoming better organized and will develop into a tropical depression soon.

If the system develops, it will be the 30 named storm of the 2020 Atlantic Hurricane Season.

It will be called Iota.

NHC said the wave is producing a large area of showers and thunderstorms.

Regardless of development, NHC said this system is expected to bring heavy rainfall along with possible flash flooding to portions of Hispaniola over the next day or so.