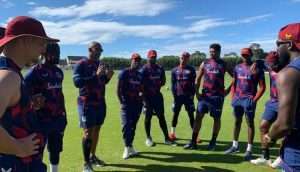 (ESPN CRIC INFO) – The West Indies squad has been barred from training for the rest of their managed isolation period in Christchurch after breaking protocols including by sharing food and socialising in hallways of their government-approved hotel.

There is no indication the bubble has been breached by any of the squad leaving or anyone from outside entering the facility, but the Ministry of Health has said that the players will have to spend the remainder of their 14 days – which is due to expire on Friday – in the facility.

At this stage there is no suggestion the tour is under threat but the Ministry has the power to extend the isolation period. All the COVID-19 tests from the squad during their time in New Zealand have so far come back negative with the final round due on Wednesday.

“As with other sports teams that have come to New Zealand, the West Indies cricket team were given certain exemptions from the managed isolation rules which apply to everyone else. This included being able to be in larger bubbles and train in preparation for their international games,” Director-General of Health Dr Ashley Bloomfield said at a daily briefing

“It is a privilege to come here but in return they have to stick to the rules. Keeping COVID-19 out of our communities and keeping our staff safe depends on it. They didn’t do that, despite agreeing to abide by the parameters of the exemption.

“Consequently, we have revoked the team’s exemption from those requirements of the Managed Isolation and Quarantine Order. This means members of the team will spend the remainder of their time in managed isolation and they are unable to train.”

Dr Bloomfield added there was no risk to the public. “It’s important to note that all incidents occurred within the hotel facility.”

The players had been able to train in increasing sized groups during their managed isolation. They had the last of three COVID-19 tests on Wednesday and if they all come back negative the squad are scheduled to leave isolation and travel to Queenstown on Friday ahead of two matches against New Zealand A.

“NZC was yesterday made aware that some members of the West Indies team had contravened protocols within the Managed Isolation Facility in Christchurch,” an NZC statement said.

“These incidents included some players compromising bubble integrity by sharing food, and socialising in hallways.

“There is no evidence, or suggestion, that any members of the touring party left the facility, or that any unauthorised persons accessed it.

“NZC is supportive of the Ministry of Health and Government position. Public health and safety has always been our primary focus in hosting overseas teams and this remains our No.1 priority.

“NZC will continue working with the West Indies team and management, and relevant Government agencies, to ensure there is no repeat of these violations.”

The members of the West Indies squad who have been taking part in the IPL – plus the New Zealand players at the tournament – are due to arrive in the country on Thursday when they will begin a period of 14 days of managed isolation which will end the day before the opening T20I in Auckland on November 27.

West Indies were the first team to tour when international cricket resumed amid the COVID-19 when they travelled to England for a Test series. That involved being in a biosecure bubble from start to finish as they moved between Old Trafford and the Ageas Bowl.