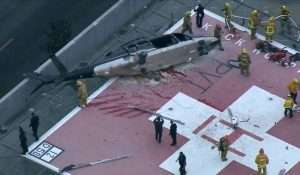 (AFP) — Talk about a brave heart — a donated heart was alive and pumping Monday after surviving the crash of the helicopter transporting the organ to a California hospital and then falling out of the hands of a medical worker who retrieved it.

Footage of the incident on Friday showed the aircraft lying on its side on the roof of the University of Southern California’s Keck Hospital in east Los Angeles.

The aircraft had flown from a hospital in southern California with the donor heart for a transplant and crashed for unknown reasons on the USC hospital helipad.

Video footage showed fire crews retrieving the organ and handing it over to a medical worker in hospital scrubs.

The worker then trips on a metal plate and falls over as another hospital employee rushes to pick up the precious package.

A hospital spokesperson told AFP that the organ was successfully transplanted on Friday, and the patient was doing well.

“The heart itself was fine after being dropped,” the spokesperson said.

Officials said all three people on board the aircraft were doing well, although the pilot had suffered minor injuries.