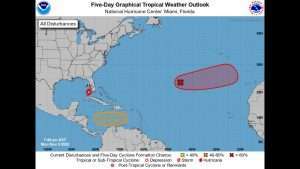 (LOOP NEWS CARIBBEAN) – Two low pressure systems, with the potential for further development, are located in the Atlantic basin and central Caribbean Sea.

The US National Hurricane centre says the first system, which is located several hundred miles southwest of the Azores, is expected to develop into a tropical or subtropical storm during the next few days while the system moves eastward or east-north-eastward over the north-eastern Atlantic Ocean.

The second system is a tropical wave that is forecast to move over the central Caribbean Sea, where an area of low pressure could form in a couple of days.

NHC said environmental conditions are forecast to be conducive for development and a tropical depression could form late this week or over the weekend while the system moves slowly westward.