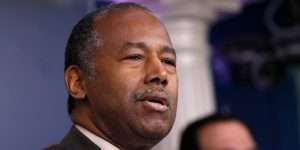 (BUSINESS INSIDER ) – Ben Carson, the secretary of housing and urban development, has tested positive for the novel coronavirus, ABC News’ Katherine Faulders reported on Monday. Several other media outlets, including Bloomberg, CNN, and NBC News, confirmed the news shortly after.

“His deputy chief of staff says he’s ‘in good spirits & feels fortunate to have access to effective therapeutics which aid and markedly speed his recovery,'” Faulders tweeted.

She added that Carson attended the election-night watch party at the White House last week. The White House chief of staff, Mark Meadows, told associates last Wednesday that he tested positive for COVID-19. Meadows had also attended the watch party the night before, The New York Times reported. On Monday afternoon, Bloomberg reported that David Bossie, a Trump adviser who is leading the legal fight to overturn the election results, tested positive on Sunday.

The election-night party featured little social distancing and almost no masks — and with Meadows, Carson, and several White House staffers testing positive, the event has invited sharp scrutiny, particularly given the White House’s refusal to disclose who has been infected.

The Los Angeles Times reported that many White House and campaign officials and those who attended the election-night party were not informed about the diagnoses and found out only when news outlets reported on them. PBS News’ Yamiche Alcindor said she spoke to several aides on election night “who were worried the event would become a super spreader and felt pressured to go to save face.”

So far, six White House aides and a Trump campaign staffer have tested positive for the virus in the days before and after the election-night party, The New York Times reported on Friday.

Bloomberg News reported that overall, more than three dozen people associated with Trump and the White House had been infected, including the president, first lady Melania Trump, and Barron Trump. Hope Hicks, the White House counselor, had also tested positive, as had Bill Stepien, the Trump campaign manager.

The World Health Organization declared the COVID-19 outbreak a pandemic in March. The US has about 10 million confirmed cases, the most of any country. As of Monday morning, more than 237,000 Americans had died from the disease, according to data from Johns Hopkins University.

Earlier Monday, the pharmaceutical company Pfizer announced that its coronavirus vaccine was found to be more than 90% effective in preventing the disease in late-stage trials.

Dr. Anthony Fauci, the US’s top infectious-disease expert, applauded the news, describing the 90% success rate as “just extraordinary” and saying the vaccine would have a “major impact” on the US’s ability to combat the pandemic.

Trump and Vice President Mike Pence also celebrated the milestone but falsely painted it as a joint achievement between the administration and Pfizer. The pharmaceutical giant did not use taxpayer dollars to research and develop the vaccine.

“We were never part of the Warp Speed,” Kathrin Jansen, a senior vice president and the head of vaccine research and development at Pfizer, told The Times, referring to the government’s Operation Warp Speed initiative to speed up the development and distribution of a COVID-19 vaccine.

“We have never taken any money from the US government, or from anyone,” Jansen added.