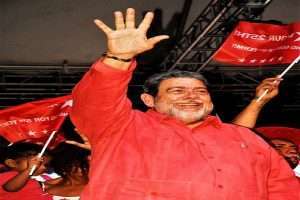 Preliminary figures released by the Electoral Office showed that the ULP had won nine of the 15 seats in the Parliament, an increase of three seats on the previous one seat majority he had enjoyed in the last two general elections. It is the first time that a political party has won five consecutive general elections in St. Vincent & the Grenadines.

Gonsalves, 74, easily won his North Central Windward seat he has been representing since 2001, brushing aside the two other candidates in Chieftain Neptune of the main opposition New Democratic Party (NDP) and Kadmiel McFee of the CVG Green Party.

In a message posted on his Facebook page, Gonsalves thanked voters for returning the ULP to power.

“It’s celebration time. It is five in they tail,” he wrote as party supporters gathered here for the celebration.

“Today, the people of St Vincent & the Grenadines embraced the politics of “Lifting SVG Higher. They embraced our progressive agenda for the future by returning us to government.

“I am humbled and honoured that the people of St Vincent & the Grenadines embraced our bold vision for the future and rejected the politics of hate, backwardsness and colonialism.

“We ask Vincentians to celebrate this victory in peace and maturity. Now is the time to come together as one nation to address our developmental challenges and move forward to uplift our nation and its people,” Gonsalves added.