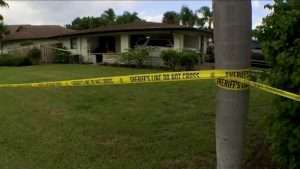 (NBC NEWS) – A Florida husband said he fatally shot his pregnant wife after waking up in the middle of the night and thinking she was an intruder, according to authorities who believe it was nothing more than a tragic mistake.

Officers were called to the home in Stuart, about 40 miles northwest of Palm Beach, around 1:30 a.m. on Wednesday, according to a Martin County Sheriff’s Office incident report obtained by NBC News.

When officers arrived, the man was standing outside the home with the couple’s other child yelling for help. He told police that he had shot his wife by accident and his “life is over,” the report states.

The wife was found inside the home suffering from a gunshot wound to the head. A handgun with an attached light that was turned on was found next to her and another handgun was located on a dresser in the couple’s bedroom, according to the report.

The wife was taken to the hospital where she was pronounced dead.

The sheriff’s office told local station WPBF in Tequesta that the wife was six months pregnant and doctors were able to save the baby.

Sheriff William Snyder told the outlet that the husband said he woke up in the middle of the night, thought he heard an intruder in the home and grabbed his firearm to investigate. The man, who said he didn’t realize his wife had gotten up, saw a shape in the hallway and fired a single shot, the sheriff said.

“Unfortunately it turned out to be his wife,” Snyder said.

Snyder said there is no indication that the shooting was more than just a mistake, but it is still being treated as a suspicious death.

“Though we do have a good statement from him, we don’t take anything at face value and we’ll continue investigating, do all of the backgrounds. There’s a lot of investigative steps that we’ll take to make sure that he’s telling the truth,” he told the outlet.

The names of the couple have not been released due to Marsy’s Law, which protects the identities of victims of a crime, a sheriff’s office spokeswoman said.

Snyder urged gun owners to be cautious, especially when there are family members in the home.

“When you have a home where you have family members, you have to be even more careful and wait that extra second and do everything you can to make sure you know what you’re dealing with when you’re about to use deadly force,” he said.