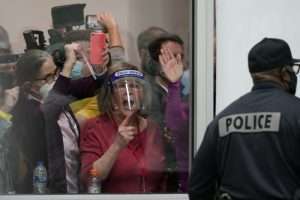 (AP) — President Donald Trump’s campaign filed lawsuits Wednesday in Pennsylvania, Michigan and Georgia, laying the groundwork for contesting battleground states as he slipped behind Democrat Joe Biden in the hunt for the 270 Electoral College votes needed to win the White House.

The new filings, joining existing Republican legal challenges in Pennsylvania and Nevada, demand better access for campaign observers to locations where ballots are being processed and counted, and absentee ballot concerns, the campaign said.

However, at one Michigan location in question The Associated Press observed poll watchers from both sides monitoring on Wednesday.

The AP called Michigan for Democrat Joe Biden on Wednesday. Nevada, Pennsylvania and Georgia are undecided.

The Trump campaign also is seeking to intervene in a Pennsylvania case at the Supreme Court that deals with whether ballots received up to three days after the election can be counted, deputy campaign manager Justin Clark said.

The actions reveal an emerging legal strategy that the president had signaled for weeks, namely that he would attack the integrity of the voting process in states where the result could mean his defeat.

His campaign also announced that it would ask for a recount in Wisconsin, a state the AP called for Biden on Wednesday afternoon. Campaign manager Bill Stepien cited “irregularities in several Wisconsin counties”, without providing specifics.

Biden said Wednesday the count should continue in all states, adding, “No one’s going to take our democracy away from us — not now, not ever.”

Campaign spokesman Andrew Bates said legal challenges were not the behaviour of a winning campaign.

“What makes these charades especially pathetic is that while Trump is demanding recounts in places he has already lost, he’s simultaneously engaged in fruitless attempts to halt the counting of votes in other states in which he’s on the road to defeat,” Bates said in a statement.

Election officials continued to count votes across the country, the normal process on the day following voting. Unlike in previous years, states were contending with an avalanche of mail ballots driven by fears of voting in person during a pandemic. At least 103 million people voted early, either by mail or in-person, representing 74% of the total votes cast in the 2016 presidential election.