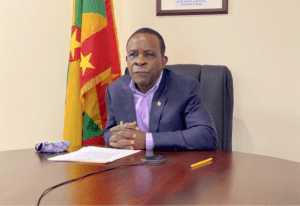 PR – Prime Minister and Minister for National Security, Dr. the Right  Honourable Keith Mitchell, met with the leadership of the Royal Grenada Police Force  this week to discuss several matters pertaining to the effective operation of the force and  to obtain feedback on what Government can do to help enhance the work of police officers.

Dr. Mitchell commended several of the RGPF’s initiatives including the formation of the  Cold Case Unit, the introduction of the body cameras and the new thrust in community  policing.

He said, “Community policing is a critical aspect of your duty. It is well-known that  community support and cooperation go a long way in helping to solve major crimes and  therefore significant emphasis should be placed on fostering good relations within  communities. The more we enhance community policing, the more effective the work of  the police will be.”

The Prime Minister also commended the rank and file of the RGPF for their ongoing  commitment to maintaining law and order, particularly during the lockdown period that  was instituted as part of the national strategy to combat the current COVID-19 pandemic.

On the subject of marijuana, the Prime Minister said while Grenada has not yet taken a  decision on changes to be made to the law, the country cannot be immune to the changes  that are taking place globally.

Dr. Mitchell said, “I can tell you that we are looking at the laws, and legislation will be  brought to parliament to give effect to a new policy. I assure you that the process of  change will involve public consultation.”

At the meeting, the Prime Minister and Minister for National Security also expressed concern about the recent series of events involving the shooting of one young man, followed days later by his father attacking and injuring two police officers. Tragically, the  father was shot by police during the attack and later succumbed to his injuries.

He said, “I encourage police officers to be vigilant but to also use their discretion. A police  officer is not only a law enforcer, but must also function as a psychologist and a diplomat.  Therefore, the approach to duty must demonstrate a combination of these roles and their  applicability in different situations. In discharging your duties as enforcers of the law,  officers should use their own judgment. I am not saying to disregard the provisions of the  law; I am saying that judgment needs to be part of the equation.”

The Prime Minister and Minister for National Security told the RGPF hierarchy, he has  been questioned in recent public meetings about police officers abusing their powers.

The Prime Minister ended his contribution to the meeting by encouraging officers to  continue doing the best job they can and assuring them that Government will continue to  ensure that the necessary resources are provided to facilitate the effective operation of  the RGPF.