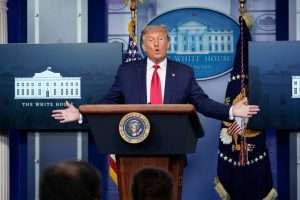 (AFP) — The head of an international observer mission to the US elections accused Donald Trump on Thursday of a “gross abuse of office” after the president alleged he was being cheated and demanded that vote counting be halted.

“The most disturbing thing was that with presidential fanfare of the White House, that is, with all the insignia of power, the American commander-in-chief called for an end to the count because of his purported victory,” Michael Link told the German daily Stuttgarter Zeitung.

“That was a gross abuse of office,” he said, adding that Trump’s “claims of manipulation are baseless”.