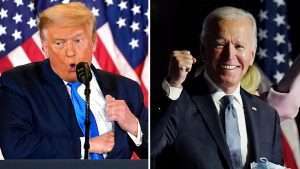 (AFP) — US President Donald Trump’s campaign on Wednesday mounted challenges to vote counts in Wisconsin, which US media says Joe Biden has won, and Michigan, in which the Democrat holds a slim lead; two crucial states that could decide the election.

The Trump campaign alleged without evidence that there had been irregularities in “several” Wisconsin counties and that Michigan had not allowed the president’s team to observe counting in “numerous” locations.

In Wisconsin, the Trump campaign said it had “serious doubts” about the validity of the results.

CNN and The New York Times, citing the Associated Press, have called the race in favour of the former vice president, giving him 10 more electoral votes and a total so far of 248. The magic number for victory is 270.

All votes have been counted and Biden enjoyed an edge of some 20,000 votes — similar to Trump’s margin when he won Wisconsin in 2016 over Hillary Clinton.

“The president is well within the threshold to request a recount and we will immediately do so,” Bill Stepien, Trump’s campaign manager, said.

Although Biden’s margin was just a sliver of the more than 3.2 million votes cast in Wisconsin, Trump may have a hard time recovering that many through a typical recount.

A recount in Wisconsin during the 2016 presidential election — requested by the Green Party after Clinton’s camp decided not to pursue it — found only 131 extra votes for Trump.

The campaign also said it was taking legal action to suspend the counting of remaining votes in Michigan, where remaining ballots are largely from Democratic-leaning areas including majority African-American Detroit.

“We have filed suit today in the Michigan Court of Claims to halt counting until meaningful access has been granted,” Stepien said in a statement.

“We also demand to review those ballots which were opened and counted while we did not have meaningful access.

“President Trump is committed to ensuring that all legal votes are counted in Michigan and everywhere else.”

Michigan authorities have said they are committed to counting every note. As the campaign announced its suit, Michigan’s secretary of state, Jocelyn Benson, tweeted a map of the Great Lakes state that said next to it, “Patience is a Virtue”.

With Trump and Biden neck and neck across the rest of the country in electoral votes, the deciding states in their contest have come down to Arizona, Georgia, North Carolina, Nevada, Michigan, Pennsylvania and Wisconsin.