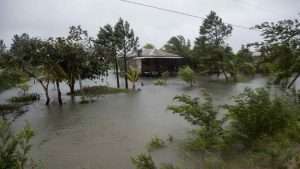 (AFP) – Eta was downgraded to a Category 2 hurricane Tuesday even as it continued to pummel Nicaragua, killing two people there and one in neighbouring Honduras as it unleashed fierce winds and heavy downpours.

The hurricane, which dropped from a Category 4 storm earlier in the day as it moved inland, hammered impoverished indigenous communities along the coast and caused heavy rains throughout much of Central America.

“Quite a lot of trees have fallen and traffic has been badly affected” in the region, said Nicaraguan infrastructure minister Oscar Mojica.

Packing 110 mile (175 kilometer) an hour winds, Eta tore up trees and ripped roofs off homes in Bilwi, the biggest town on the northeastern coast, also known as Puerto Cabezas.

“We spent the whole night with strong gusts of wind, accompanied by rain,” Kenny Lisby, head of a local radio station, told AFP. “It’s possible there will be quite a lot of destruction.”

Winds tore down the concrete perimeter walls of the town’s baseball stadium, and left a trail of fallen trees as dazed cattle and domestic animals wandered through the streets, AFP reporters said.

Giovany Nelson, 34, said his family was “locked in a room listening to the wind destroying the roof.”

Two Nicaraguans died after they were buried in a landslide while working in a mine in the municipality of Bonanza, the director of the local Red Cross, Auner Garcia, told Channel 10 television.

Authorities in Honduras said that a child died in a collapsed house, bringing the death toll in the region to three so far.

The US National Hurricane Center warned the effects of Eta could be catastrophic for the region.

The Wawa river that connects Bilwi to the rest of the country broke its banks.

Eta is forecast to continue moving inland over northern Nicaragua and central Honduras through Wednesday and into Thursday.