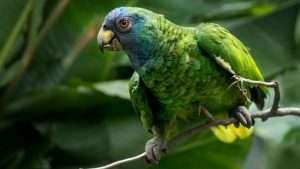 (LOOP NEWS CARIBBEAN) – Next time someone says you “chat like a parrot”, don’t get too offended.

An Australian man is today thanking his pet parrot Eric for saving his life after a fire broke out at his Brisbane home as he slept last night.

“I heard a bang and Eric, my parrot, he started to yell, so I woke up and I smelled a bit of smoke,” Nguyen told Australia’s ABC news.

“I grabbed Eric, opened the door and looked to the back of the house and saw some flames. And so I grabbed my bag and took off and bolted downstairs. I’m in shock but I’m fine,” the Kangaroo Point resident added.

The house had fire and smoke detectors, however, they did not go off at the time.

Much of the house was engulfed in fire by the time firefighters arrived on the scene.