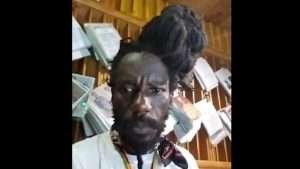 (LOOP NEWS CARIBBEAN) – Dancehall firebrand Sizzla dumped coals of fiery skepticism on the heads of advocates pushing for a COVID-19 vaccine and appeared to join the throngs of anti-mask protesters as he urged people “not to mask from God”.

“Bun out mask man.  Weh yuh a mask from God bout? Eh? Watch dis, di yute dem smart. Caw grow up in di garage and when you a duh sanding work, sanding the filler of the car you gotta wear a natural mask more filtered than this mask.  And such a dangerous virus, a likkle kerchief or a little domestic mask can shield yuh from it?  And if yuh need the mask, why yuh need vaccine?  If di mask work, why social distancing?  Is a trick man. Wha wi a mask from God bout?” he added.

He asked legitimate questions about carbon emissions pre-COVID, life-threatening air pollutants and consumption of GMO foods and questioned why the need for vaccines, which he said ought to be rejected by black people. He warned of ‘honey-coated words’, urged farming and warned that the vaccines “will be micro-chipped and embedded with nano-particles to manipulate DNA activities within oonuself” to obliterate people of African descent.

Sizzla made his controversial comments during an hour-long live session labeled the Million Times Live by Sizzla, done to drum up support for his newly-released Million Times album from which he played tracks during his musings.

The ‘Black Woman and Child’ singer also questioned the efficacy of only wearing handkerchiefs or domestic masks and not heavy-duty ones as barriers, to such a dangerous virus, claiming it made very little sense to him.

Sizzla then seemed to veer off on a tangent that pointed to a new ‘space war” that seemed straight out of a Hollywood blockbuster movie.

“Ah the great war ah forward again cause oonu did cause da war ya in space long time and damage the planet and  kill off nuff people, and people did affi fly out inna space ship and come ah Earth. Earth is a vacation planet, normally when astronaut’s spaceship lose control, dem head fi Earth, look pon the space show dem, is the time this, ah computer and touch screen we ah use,” Sizzla mused.