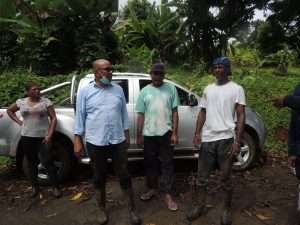 PR – Windsor Estate, St. Andrew was the first stop for Minister for Agriculture, Forestry, Lands and Labour, Hon. Peter David, as he makes the acquaintance of farmers in the industry, three weeks after taking up his new portfolio.

Minister David, who was accompanied by his technical team, listened to the concerns of more than 20 farmers through one on one discussions on issues such as, dilapidated roads, fertilisers and praedial larceny, with the hope that a workable solution would be found. He also used the opportunity to assess farm roads.

“I come here as an advocate for agriculture,” said Minister David, to the farmers, who formed a discussion circle to dialogue with the new minister. “The day after I got into agriculture, I got calls from all over the world saying they want to help. Morocco’s trying to work on some fertilizer, so I am going to work on all of that.”

Encouraging collaborative efforts among the farmers and noting, that due to the economic impact of COVID-19, it will be difficult to have everything done; the Minister stated that the most critical areas must be identified for assistance.

“With respect to the roads and the binders and the concrete, I agree that we have to find a way to do it. Identify the areas you think are critical. As I said, these are difficult times. These are COVID times. The economy is down, but let us suppose we can get 50 bags of cement. We can take it piece by piece and according to priority,” he said.

With the aim of fostering healthy relationships with the farmers, Minister David distributed his contact number and informed them of his open-door policy to discuss concerns and ideas to take the industry forward.