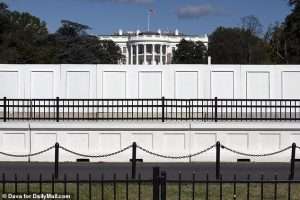 (ABC NEWS) – Non-scaleable fences are being erected around the White House, in anticipation of post-election protests.

Additional fencing already has been erected around Lafayette Square, across Pennsylvania Avenue from the White House, the location of protests over racial equality in June.

The fencing, according to officials is one of several measures being taken ahead of expected demonstrations.

Businesses in downtown Washington have boarded up windows in anticipation of violence as have some in New York City.

District of Columbia Mayor Muriel Bowser and Police Chief Peter Newsham discussed preparations in the city ahead of the election during a press conference last week.

Newsham told reporters that his office has not received any credible threats of violence, but that the city has received a number of requests for demonstration permits.

“We welcome people to come to the District of Columbia to exercise their First Amendment right, but we won’t tolerate violence or unrest,” said Newsham.

Bowser announced the city will implement parking restrictions, with the possibility of road closures in the downtown area on Election Day.

The Mayor also said she has not requested help from the National Guard.