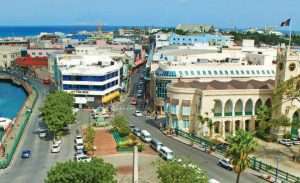 (CMC) — Barbados on Tuesday named 14 more countries to the list of those deemed high risk for the coronavirus (COVID-19), bringing the total number in this category to 50 in a bid to curb the spread of the virus.

They join 36 others including Barbados’ major tourism markets, the United States, the United Kingdom, and Canada, as well as the Caribbean islands of Jamaica, Guyana, and Trinidad and Tobago.

Five countries are now deemed medium risk for entry. These are Australia, Bermuda, New Zealand, St Lucia and St Vincent and the Grenadines. There are only two countries in the low risk category — Egypt and Greenland, while six are categorised as very low risk, namely Anguilla, China, Dominica, Grenada, Montserrat, and St Kitts and Nevis.

According to the authorities, it is mandatory that all persons travelling to Barbados from high and medium risk countries have a negative COVID-19 PCR test done at an accredited or certified facility within three days prior to arrival.

They said people arriving from Canada, however, are allowed to be tested on arrival in Barbados, if they are unable to receive their test results in time for departure from their country.

“All high-risk passengers are required to quarantine at a designated hotel or approved villa at their own expense or free of charge at a government facility, up to the time of a second test, which will be four to five days after the first test.

The authorities said that persons from low risk countries are strongly advised to have a negative test taken within five days of arrival, and those who arrive without it will be tested on arrival. Those coming to Barbados from very low risk countries do not require a test for entry.

Meanwhile, Barbados reported that a 36-year-old visitor from Holland is the latest person to test positive for COVID-19.

It said the man, who arrived on British Airways on October 30, was confirmed positive for the viral illness after a second test.

No one was discharged from isolation. Therefore, the numbers in isolation have risen to eight, and recoveries remain at 222. There are now 238 confirmed cases since March 16, the authorities added.

In Suriname, for the first time since May 31 the number of active COVID-19 cases in the Dutch-speaking Caribbean Community country is below 20. The authorities said on Monday night that after a week-long number in their 30s, the country reported 19 new cases of the virus.

“In the past 24 hours, only 36 people have been tested for the corona virus: two of them — one in the capital Paramaribo and one in the Para district — were found to be infected, the other 34 tested negative. In the same time span, 16 people were declared cured, bringing the total to 5,082. Suriname has 5,212 infections,” the authorities said in a statement.

They said that the death toll remains at 111.

In Trinidad and Tobago, the Ministry of Health is reporting no new COVID-19 cases or deaths for the past 24 hours.

In its latest update, the ministry said that the number of active cases dropped to 708 from 832 and that the total number of deaths remains at 109.

There are 61 patients in hospitals and 30 in step-down facilities. State quarantine facilities are holding 213 people and there are 617 in self-isolation, down from 741 on Sunday.