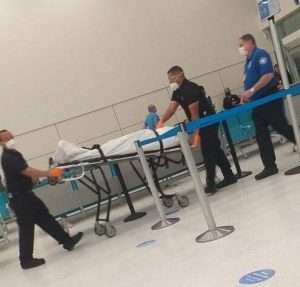 (TRINIDAD EXPRESS) – A Trinidad and Tobago national onboard a Caribbean Airlines repatriation flight died while en route to the Piarco International Airport on Saturday.

Flight 3525, which departed from JFK international Airport at 7.20p.m. Saturday was scheduled to arrive in Trinidad before midnight. However according to a passenger onboard the flight, the aircraft was redirected to Puerto Rico at around 11.20 p.m. as an elderly male national fell unconscious and could not be resuscitated.

The patient was accompanied by his son. After indicating his illness, he was placed on the aisle as flight attendants asked for a doctor or nurse’s assistance.

The Express was told that a nurse onboard attempted to resuscitate the national but was unsuccessful. Passengers believe that the national had already passed away.

After pleas from the patient’s son, the flight landed in Puerto Rico and awaited assistance from professionals. Paramedics and emergency responders boarded the craft but could not render assistance until the arrival of the District Medical Officer at 1a.m. The patient was then declared dead.

The deceased’s son was said to be in a state of shock.

Voice recordings from onboard the aircraft were shared with the Express. On one, an anguished man is heard questioning the flight crew why no medical aid was being given to the stricken passenger.

45 minutes later, those on board the flight were asked to disembark and await further instructions.

Shortly after 5.a.m. passengers were told that the aircraft’s crew needed to be replenished. Approximately 100 nationals on board the vessel were placed in the San Juan Airport Hotel where they await word from Caribbean Airlines.

A flight returning to Trinidad is scheduled to leave at 9 p.m. today.

Breakfast has been provided to nationals but those at the airport say they are unsure of other meals and provisions will be afforded to them.

“This has been very traumatizing for all of us. I can only imagine what the family is going through. Caribbean Airlines has put us into a state of panic as well because there is barely any communication from them. We were all stranded for so long and so grateful to be coming home and now we are not sure of what’s happening,” said the national.