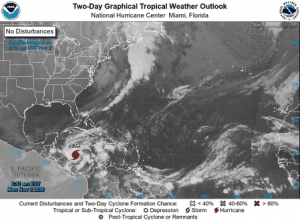 (AP) — Eta was upgraded to a hurricane early Monday, threatening to bring heavy rain, storm surge, landslides and more to parts of Central America and the Caribbean.

Eta had maximum sustained winds of 75 mph (120 kph) and was located about 155 miles (250 kilometres) east of the Nicaragua-Honduras border, according to the National Hurricane Center. It was moving west at 12 mph (19 kph).

Rapid strengthening of the system was possible, and forecasters said Eta could be a major hurricane before its expected landfall early Tuesday. A hurricane warning was in effect for coastal Nicaragua.

Forecasters said central and northern Nicaragua into much of Honduras could get 15 to 25 inches (380 to 640 millimetres) of rain, with 35 inches (890 millimetres) in isolated areas. Heavy rains also were likely in eastern Guatemala, southern Belize and Jamaica.

Storm surge up to 15 feet (4.5 meters) above normal tides was possible for the coast of Nicaragua. The hurricane centre also warned of life-threatening flash flooding and landslides in areas with higher terrain.

Eta is the 28th named Atlantic storm this season, tying the 2005 record for named storms. However, this is the first time the Greek letter Eta is being used as a storm name because after the 2005 season ended, meteorologists went back and determined there had been a storm that should have gotten a name but didn’t.

Hurricane season still has a month to go, ending November 30. And in 2005, Zeta formed toward the end of December.