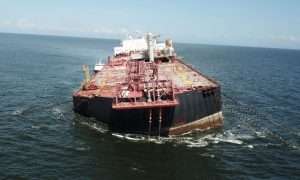 (CMC) — The Trinidad and Tobago government yesterday said it is awaiting a report from a team of local experts who on Tuesday boarded the Venezuelan oil storage vessel, the FSO Nabarima, in the Gulf of Paria, amid reports that it had been tilting.

Caribbean Community (Caricom) and Foreign Affairs Minister, Dr Emery Browne, said that the expert team assembled by the Ministry of Energy and Energy industries had been able to board the vessel after lengthy communication with Caracas on the situation dating back to several months.

“We are now awaiting a detailed report that is in progress and I am told that the Minister of Energy and Energy industries, Franklin Khan would be receiving that report before the end of today. It has been expedited,” Browne said.

He said the report would form the basis “of the next steps and any further action by the government of Trinidad and Tobago on this matter”.

“This is a key point in this development, because for the first time we have had non-Venezuelan eyes and non-Venezuelan experts on the Nabarima itself to determine the shape and condition of the vessel.”

Browne said that in advance of receiving the report Port of Spain has been in communication with the Guyana-based Caribbean Community (Caricom) Secretary General, Irwin la Rocque and the Trinidad and Tobago-based Association of Caribbean States (ACS).

“There are a number channels of communication that are ongoing so that depending on the details of the report we would be able to take in very short order the proper and required next steps,” he said, adding “this has been determined as the best course of action because we need to understand rules and responsibilities”.

Browne made it clear that the vessel was in Venezuelan waters and Trinidad and Tobago had to go through the various diplomatic channels in order to safeguard its own environment.

“The government cannot act and operate like an NGO (non-government organisation) or an activist group, which may have a very different threshold for certain types of action.”

Barbados and Guyana have already said they were monitoring the situation.

The Civil Defence Commission (CDC) in Guyana said it has made several analyses and modelling of the potential threat of an oil spill from the FSO Nabarima with 173,000 tons of oil and that the prognosis does not show any direct impact on Guyana’s shores or marine ecosystem from any releases happening.

The Barbados government in a statement on Tuesday night said it has evaluated the issue and has devise mitigation methods in the eventuality of an oil spill.

The Mia Mottley government said it had an emergency response unit on standby in the unlikely event of an oil spill.

Last weekend, the United States Embassy here issued a brief statement in which it said Washington “remains concerned by the potential risk to safety and environment” posed by the, Nabarima.

“We strongly support immediate actions to bring the Nabarima up to international safety standards and avoid possible environmental harm, which could negatively impact not only the Venezuelan people but also those in nearby countries. PdVSA has a responsibility to take action to avoid an environmental disaster in Venezuelan waters.

“As a general matter, the United States’ Venezuela sanctions programme is not designed to target activities addressing safety, environmental, or humanitarian concerns. These activities to avert an ecological disaster are consistent with US policy to support the Venezuelan people and avoid further harm to the environment,” the embassy said in its statement.

Browne said that since holding discussions with his counterpart in Caracas, Port of Spain has been assured that the vessel is stable.