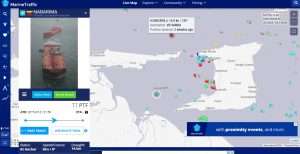 (LOOP NEWS TT) – Even as a team of Trinidadian experts near the listing oil storage vessel Nabarima, Venezuelan oil tanker, the Icaro, which was sanctioned by the US, has been positioned near the Gulf of Paria awaiting instructions.

According to Argus Media, Panamian-registered vessel the Icaro was en route to Guiria, allegedly to assist in the transfer of crude from the beleaguered Nabarima, said to be at capacity with 1.3 million barrels of oil and listing.

Eni told Loop News that the company, which has a 26 per cent stake in the Corocoro field, said they are awaiting approvals from PdVSA and the US to ensure no sanctions result from the operation:

‘Eni is ready to perform activities to ensure the safe offloading of the Nabarima FSO offshore Venezuela, using state-of-the-art solutions.’

‘The company will be able to proceed only after approval of its plan by PdVSA (majority shareholder and operator in Petrosucre) and upon formal assurance by the competent US authorities that the mentioned activities bring no sanctions risk either for Eni and its contractors.’

Minister of Foreign and CARICOM Affairs, Amery Browne, said permission for the Trinidadian team’s visit was sought and received for today.

Speaking on the Now Morning Show, Browne said the matter is of extreme concern to government:

‘The Nabarima is located in Venezuelan waters. Our understanding is that there’s a significant volume of oil which has not been removed for some time. There were reports that the vessel was taking on water at some point in August and we received feedback from the Venezuelan government that what caused that had been repaired and the vessel was stable.’

‘[However] reports on social media and otherwise suggests all may not be well. The government of Trinidad and Tobago takes these concerns very seriously and we have taken immediate and then consistent action to press the governmentt of Venezuela to take action on a matter that lies within their jurisdiction.’

‘We have issued a series of diplomatic notes to the government of Venezuela requesting, in the first instance, validation of the condition of the vessel, and then subsequently requesting authorisation to cross the border, approach the vessel, board the vessel, and conduct a specific series of scientific assessments, to determine for ourselves and to reassure the people of Trinidad and Tobago on the state and stability of the vessel.’

He said they must receive specific authorisation before proceeding to the vessel:

‘As you would be aware government is not an NGO, we cannot violate domestic and international law. We have to receive a specific authorisation for an ingress into Venezuela, a crossing of the border and approach to their asset.’

He said after a series of diplomatic interventions and much effort, they received official authorisation to carry out inspections today.

‘I can indicate that we have a team of experts that will be crossing the border at approximately 9am today. They will board the Nabarima and conduct a series of agreed assessments. They will present a report to [Energy Minister Franklin Khan] and that will form the basis of the next steps.’

Browne said the report should be ready before the end of this week.

He emphasised that they have taken the reports very seriously: ‘We take very seriously the reported threats to the environment, the Gulf of Paria and the rest of the Caribbean.’

Conservation NGO Fishermen and Friends of the Sea shared video footage of the vessel on October 17, which received half a million views on YouTube, with many calling for urgent action.

A petition has also been launched online with over 25,000 signatures as of this morning.

British Man Held With US$400,000 Worth Of Cocaine At Sangster Airport