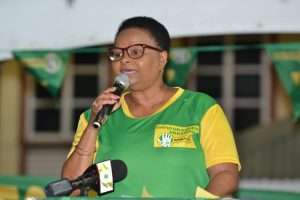 Lawrence, who is also the Chairman of the People’s National Congress-Reform (PNC-R), turned up at the Criminal Investigations Department (CID) Headquarters, Eve Leary in Georgetown today accompanied by her attorney Nigel Hughes and supporters.

Hughes told the media that Lawrence is being questioned about attempts on March 5 to declare the elections at the Ashmins Building using statements of polls that weren’t verified.

Hughes said his client “believes this is part of an orchestrated plan to detain her.”