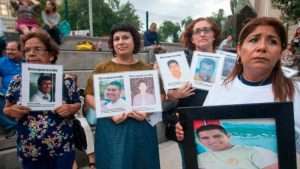 (AFP) — More than 77,000 people have gone missing in violence-wracked Mexico, mostly since the government declared war on powerful drug cartels in 2006, the authorities said Wednesday.

Almost one-fifth of the disappearances have happened in the past two years — including 8,345 people in 2019 alone — and are mostly linked to organized crime, according to the interior ministry.

One of the highest profile cases is that of 43 students from a teacher’s college who went missing six years ago, in an unresolved case that outraged the country.

Around 296,000 people have been murdered since the government militarized the fight against the drug cartels in 2006, according to the authorities, who say most of the killings are linked to gang violence.

Thousands of clandestine graves containing 6,900 bodies have been found since then, Alejandro Encinas, deputy minister for human rights, told reporters.