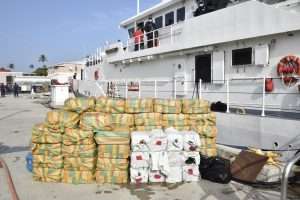 (LOOP NEWS CARIBBEAN) – A Royal Navy task group has prevented drugs worth more than £160 million from potentially reaching the UK on two daring operations in the Caribbean.

A statement says RFA Argus, alongside helicopters, Royal Marines and US Coast Guard teams, worked with Dutch Navy ship HNLMS Groningen to seize 1.7 tonnes of cocaine and 28 kilograms of amphetamines.

The bust was the second in two days after seizing 264 kilograms of cocaine in a separate operation in the region just 48 hours before.

Minister for the Armed Forces, James Heappey said: “The Armed Forces are committed to tackling organised crime, both at home and overseas, and work with our allies around the world to help protect our people and interests. The Royal Navy has once again demonstrated its professionalism and tactical operational capability in an international effort to stop illegal drug-smuggling. It is with thanks to their efforts that £160 million worth of drugs will never reach the streets of the UK.”

The first of the two recent busts came when two suspicious vessels were spotted near RFA Argus and patrol ship Groningen.

A helicopter team stopped the vessels to undertake a search.

Just two days later, RFA Argus was conducting routine training when one of its helicopters spotted a suspicious craft.

The 28,000-tonne vessel changed course to give chase but was intercepted.

Commanding Officer of RFA Argus, Captain Kevin Rimell said: “This recent interdiction is yet another example of multi-national co-operation in the Caribbean.

I am proud that the team of RFA Argus, utilising 815 and 845 Naval Air Squadron helicopters, boats crewed by RFA personnel and Royal Marines from 47 Commando, were able to take the lead in an operation alongside our US Coastguard and Dutch Navy colleagues.

Collectively we secured and apprehended a number of smugglers and a large quantity of contraband.

These are challenging times and we ask a lot of our people so it is encouraging to see that our training and professionalism continues to shine through.”

RFA Argus is in the Caribbean as part of a Royal Navy task group with HMS Medway providing support to British Overseas Territories during the hurricane season.

Both ships also continue to carry out maritime security and counter-narcotics operations in the region.