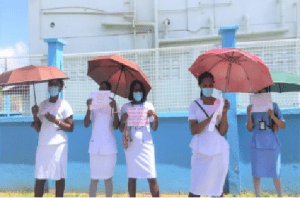 (CMC) — A recently retired nurse who worked at Georgetown Public Hospital Corporation (GPHC) passed away today from the coronavirus disease (COVID-19), becoming the first frontline worker to die of the virus since the first case was confirmed here on March 11.

The authorities confirmed that the 55-year-old male nurse was last stationed in the Accident and Emergency Unit and had underlying conditions. He was admitted to the COVID Intensive Care Unit on September 25.

GPHC public relations officer, Chel Providence, in offering sympathy on behalf of the hospital, said that the nurse had served the profession for 31 years and that he had only retired in July.

The Guyana Public Service Union (GPSU) has called on the Irfaan Ali-led government to meet with the protesting nurses.

“We have not seen a single representative from the political administration who would have come here to talk to the nurses. The nurses have real issues affecting them and their families. The union did not go to these people to come to the union and said we have issues,” said GPSU representative, Owen John.

Last Thursday, the GPSU warned of an intensification of industrial action by nurses and health care workers even as the management of the hospital threatened “disciplinary action” if they did not return to work.

The union said that the decision of the People’s Progressive Party/Civic (PPP/C) government to provide GUY$650 million to the Guyana Sugar Corporation (GuySuco) before the 2020 budget was passed, as well as the budgetary allocation of GUY$134 million to repaint State House and GUY$95 million to replace government vehicles “contributed to the anger and emotions” of the health workers.