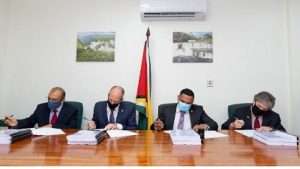 (CMC)— Guyana has signed an agreement with US oil giant, ExxonMobil for the development of the Payara field offshore.

Payara is the third project in the Stabroek Block and is expected to produce up to 220,000 barrels of oil per day after start up in 2024, using the Prosperity floating production, storage and offloading (FPSO) vessel.

“[The licence] represents the single largest investment in the history of Guyana. The investment is billed at nine billion US dollars, and with the amount of oil estimated to be in the Payara development area, it is estimated that Guyana will benefit from GUY$7.4 trillion in government revenue,” Bharrat said.

The Stabroek Block is 6.6 million acres (26,800 square kilometres) with current discovered recoverable resources estimated at more than 8 billion oil-equivalent barrels. The 18 discoveries on the block to date have established the potential for at least five FPSO vessels producing more than 750,000 barrels of oil per day by 2026.

The government statement said the licence to ExxonMobil included several clauses that were not part of the Liza production licence.

“In the Payara agreement, the Government of Guyana has negotiated for fines or penalties to be instituted for prolonged flaring,” Bharrat said, adding that haphazard flaring would not be condoned even as he acknowledged that some flaring may be necessary.

“The Environmental Protection Agency will institute fines for pollution and the government of Guyana will also introduce penalties for the wastage gas because the flaring means that we are wasting the gas which can be utilised in a more meaningful way.”

Bharrat stated this clause comes on the heels of the Government’s dissatisfaction with flaring aboard the Liza Destiny FPSO, an issue which is being resolved.

The agreement includes US$400,000 for yearly audits of the Payara project and Bharrat said “this is something that was not in the Liza development that we managed to put in Payara”.

Further, the agreement provides for testing of water extracted with the crude (produced water) prior to it being expelled into the ocean. This will be done according to international standards.

The EPA will play a major role in testing the water regularly and Bharrat said the operation is safe because of its distance from the shore and the depth of the ocean at the production site.

He said a clause in the agreement stipulates wells must be sealed within five days of an oil spill. Additionally, the clause compels Esso Exploration and Production Guyana Limited (EEPGL) to commit to a study to bring that timeframe down to three days.

“That is something significant for our country that is now new in the oil and gas sector,” Bharrat said, noting that to advance local content through the petroleum sector, EEPGL will work with the Advisory Panel on Local Content convened by President Dr Mohamed Irfaan Ali.

“We need a strong local content framework, legislation to ensure that from the farmer to fisherman benefits. It’s not only about the big companies benefiting, but for every single Guyanese to benefit from the oil and gas sector,” Bharrat added.

“ExxonMobil said it “is committed to building on the capabilities from our Liza Phase 1 and 2 offshore oil developments as we sanction the Payara field and responsibly develop Guyana’s natural resources,” said Liam Mallon, president of ExxonMobil Upstream Oil & Gas Company.

“We continue to prioritise high-potential prospects in close proximity to discoveries and maximise value for our partners, which includes the people of Guyana.”

ExxonMobil’s first offshore Guyana project, Liza Phase 1, began producing in late 2019, well ahead of the industry average for development time. Liza Phase 2, remains on track to begin producing oil by early 2022. It will produce up to 220,000 barrels of oil per day at peak rates using the Liza Unity FPSO, which is under construction in Singapore.

ExxonMobil said as the new projects proceed, investment in the Guyana economy increases. More than 2,000 Guyanese are now supporting project activities on and offshore, a 50 per cent increase since 2019. ExxonMobil and its prime contractors have spent over US$300 million with more than 700 local companies since 2015.

More than 2,500 Guyanese companies are registered with the Centre for Local Business Development, which was founded by ExxonMobil and its co-venturers in 2017 to build local business capacity to support global competitiveness.