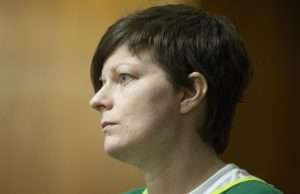 (AP) — A Kansas woman has been sentenced to life in prison for decapitating her ex-boyfriend’s mother with a pair of kitchen knives.

Rachael Hilyard, 38, of Wichita, was sentenced Tuesday in the 2017 death of 63-year-old Micki Davis, The Wichita Eagle reported.

Hilyard apologised at the hearing, which several of Davis’ family members attended in person or watched via a Zoom call.

“I feel that even death would be too good for me now. … Every day and every night I am sorry,” she said.

Authorities said Davis was attacked after going to Hilyard’s home to pick up some of her son’s property on April 9, 2017. Prosecutors said Hilyard had planned the killing.

Hilyard claimed that Davis fell during a struggle over a painting and that she carried out the decapitation because she thought Davis was dead and wanted to release her soul from her body.

A jury convicted Hilyard in February. She will be eligible for parole after serving 50 years in prison.