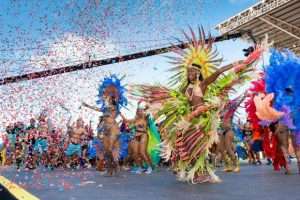 (CMC) — Prime Minister Dr Keith Rowley today gave the clearest indication yet that his administration is prepared to cancel Carnival celebrations next year as the two island republic, like all other Caribbean countries, deals with the impact of the coronavirus (COVID-19) that has so far killed 72 people here and infected 4,362 others.

“In 72 hours we will be in October and if at this time in October we are still in the throes of a pandemic, it would be madness to be talking about Carnival in February. I see no future for Carnival in Trinidad and Tobago in the months ahead,” Rowley told a forum on the national budget here.

He told the forum that it would take something dramatic to reverse his thoughts on the matter.

“I can put everybody on notice that unless there is some dramatic wind that will blow across us where, by Christmas, the pandemic would have been a thing of the past, Carnival in Trinidad and Tobago in 2021 is not on.”

There had been much speculation as to whether Trinidad and Tobago would join countries like Brazil and announce a cancellation or postponement of the Carnival, dubbed here as the greatest show on earth.

Rowley told the forum that Trinidad and Tobago should nonetheless look on the bright side, despite the fact that the cancellation could result in millions of dollars of lost revenue.

“Let us be thankful that we’re all still alive to see each other’s face. Let us remember what our country passed through in 1918,” he said, making reference to the Spanish flu pandemic.

Prime Minister Rowley added that while he understands the economic fallout that the decision will have, he’s more interested in saving lives.