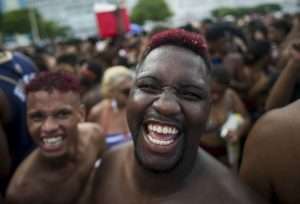 (AP) — Rio de Janeiro delayed its annual Carnival parade, saying Thursday night that the global spectacle cannot go ahead in February because of Brazil’s continued vulnerability to the pandemic.

Rio’s League of Samba Schools, LIESA, announced that the spread of the coronavirus has made it impossible to safely hold the traditional parades that are a cultural mainstay and, for many, a source of livelihood.

“Carnival is a party upon which many humble workers depend. The samba schools are community institutions, and the parades are just one detail of all that,” Luiz Antonio Simas, a historian who specialises in Rio’s Carnival, said in an interview. “An entire cultural and productive chain was disrupted by COVID.”

Rio’s City Hall has yet to announce a decision about the Carnival street parties that also take place across the city. But its tourism promotion agency said in a statement to The Associated Press on September 17 that without a coronavirus vaccine, it is uncertain when large public events can resume.

Brazil’s first confirmed coronavirus case was February 26, one day after this year’s Carnival ended. As the number of infections grew, the samba schools that participate in the glitzy annual parade halted preparations for the 2021 event. Thursday’s announcement removed the cloud of uncertainty that has hung over the city — one of worst hit by the pandemic in Brazil.

Nearly all of Rio’s samba schools are closely linked to working class communities. Their processions include elaborate floats accompanied by tireless drummers and costumed dancers who sing at the top of their lungs to impress a panel of judges. Tens of thousands of spectators pack the bleachers of the arena, known as the Sambadrome, while tens of millions watch on television.

Before the schools began competing in the 1930s, Carnival was celebrated in dance halls and haphazardly on the streets, Simas said. The parades entered the Sambadrome in the 1980s, and have become Rio’s quintessential Carnival display.

The immense labour required for each show was already stymied by restrictions on gatherings that Rio’s governor imposed in March. Even with those measures, Rio’s metropolitan region, home to 13 million people, so far has recorded more than 15,000 deaths from COVID-19.