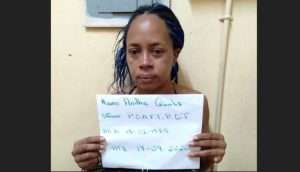 (GUYANA NEWS ROOM) – A 35-year-old woman, on Tuesday, confessed to Magistrate Crystal Lambert at the Bartica Magistrate’s Court that she trafficked cannabis to support her four children and was remanded to prison until she is sentenced.

Anitha Qualis of New Amsterdam, Berbice, made an appearance via Zoom and pleaded guilty to the charge which alleged that on September 19, 2020, at Karrau Village Essequibo River, she had in her possession 503 grams of cannabis for the purpose of trafficking.

Qualis, who did not have a lawyer, told the court that her reputed husband left her to go and work in the interior and never returned. The mother said she was forced to traffic the drugs to provide for her four children.

Magistrate remanded Lambert to prison and ordered that a probation report is prepared for sentencing on October 7.

According to the Police Prosecutor, on September 19 around 14:30h, ranks were on mobile patrol at Karrau Village when they observed Qualis acting in a suspicious manner.

The ranks intercepted Qualis, who then pulled out a black parcel underneath her clothes.

The bag was searched and compressed cannabis was found inside. She was arrested and taken to the Bartica Police Station where she was charged with the offence.