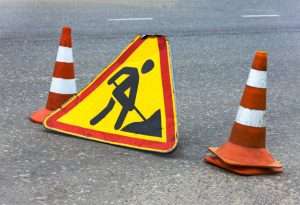 Andall noted that the Western Road Corridor is one of the main road networks for  transporting goods across the island and is heavily traversed by truck operators on  a daily basis. She observed that with the recent slippage on the Moliniere road, it  has proven to be a very challenging time for truck operators.

Infrastructural work on the Western road corridor is scheduled to commence mid 2021.

On the closure of the road on Marrast Hill, she stated it will be for a period of two  months in order to facilitate the construction of a retaining wall and rigid pavement  structure and foundational work.

CTO Andall also gave an update on the Jones Road. In the upcoming weeks, she  announced work will commence on the construction of retaining walls and drains  in the area and broken sections of the road will be repaired with asphalt. The

implementation of these works should not result in major disruption to the flow of  traffic in the area. However, contingency traffic plans would be implemented if  necessary.

Truck operators/owners at the meeting took the opportunity to emphasize some of  the issues affecting them which were the fragility of some of the roads, the lack of  retaining walls and proper drainage. Further it was pointed out that the  overhanging of vegetation is affecting their visibility and road safety. They also noted that as a result of the overhanging their trucks are sustaining damages.

Peter Charles, Engineering Assistant, recognised the support of Grenlec and other  operators in assisting in the removal of overhangings. An appeal was made to  other operators of bucket trucks to also give support. However, it was noted that  landowners also have a responsibility to clear their overhangings and to desist from  planting trees such as coconut, breadfruit and mango trees near the road ways to  avoid overhangings and the falling of fruits which can be a significant threat to the  motoring public and other road users.

Mr. Charles also appealed to truckers to clean the road ways of spillage from their  vehicles. Such spillage of gravel, sand, and concrete mix is creating significant  road hazards and traffic delays. The RGPF will be intensifying enforcement and  appeal to road users to report such incidents immediately.

All road users have a part to play in the preservation of the road network and  ensuring the safety of all.