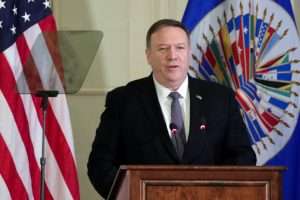 (AFP) — US Secretary of State Mike Pompeo on Thursday made a direct pitch for fast-growing Suriname and Guyana’s new leaders to pick US firms, warning of the risks of China amid an oil boom.

Pompeo became the first US secretary of state to visit the two small South American nations, long rich in lumber and minerals but where the discovery of oil has drawn a sudden new global interest.

Meeting Suriname’s newly elected president, Chan Santokhi, at his Dutch colonial-era residence in the capital Paramaribo, Pompeo said it was an “exciting time” for the economy and that the United States is “eager to partner”.

“No state-owned operation can beat the quality of the products and services of American private companies,” Pompeo told a joint news conference in a tent set up outside in the tropical heat.

“We’ve watched the Chinese Communist Party invest in countries, and it all seems great at the front end and then it all comes falling down when the political costs connected to that becomes clear,” Pompeo said.

“And we do our level best wherever I travel to make the case for just making sure everybody understands what they’re getting into.”

Pompeo later flew to neighbouring Guyana to deliver a similar message in a country expected to grow a staggering 85 per cent this year — the highest rate of any nation in the world.

Pompeo was welcomed with billboards of his likeness and a dinner in his honour thrown by another new leader, President Irfaan Ali, with a rifle-holding honour guard wearing masks to prevent the spread of COVID-19.

The stops come at the start of a three-day tour that will also take in Colombia and Brazil’s Amazonian border, part of Pompeo’s campaign to highlight the economic devastation in Nicolas Maduro’s Venezuela.

The trip is a vote of confidence in the new leaders in both Guyana and Suriname, who both are seen as turning a generational page.

Ali, 40, was inaugurated last month after defeating an incumbent who challenged the results, prompting US sanctions on members of the former administration.

In Suriname, Santokhi in July defeated Desi Bouterse, a dictator turned politician who is challenging a prison sentence for ordering the execution of political opponents in 1982.

“Like your neighbours in Guyana, the people of Suriname spoke clearly, choosing a new leader and securing your future as a democratic nation,” Pompeo told Santokhi.

The Surinamese leader vowed to work with the United States in “the defense of democracy and strong democratic institutions, the rule of law, good governance and human rights”.

But he said he did not see a competition between the United States and China, which has invited both Suriname and Guyana into its massive Belt and Road infrastructure-building initiative.

“It was not a topic of discussion, so it is not a question of making choices,” Santokhi said.

Guyana, a former British colony, and Suriname both have populations under one million people and long-running ethnic faultlines between descendants of African slaves and of indentured labourers from the Indian subcontinent.

ExxonMobil threw a sudden spotlight in 2015 when it announced that it had found one of the world’s largest oil reserves in years in the waters off Guyana.

Ali’s government is reviewing the arrangement with ExxonMobil, which will give about half of the revenue to Guyana — a deal that some development activists call too paltry.

Small-scale Chinese investment is already omnipresent in both nations. The first billboard in Pompeo’s view as he exited the Paramaribo airport was an advertisement for China’s potent Kweichow Moutain liquor with an image of the Forbidden City.