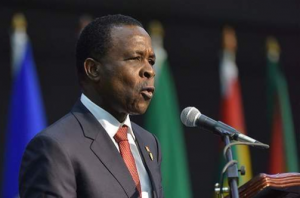 PR – Prime Minister, Dr. the Right Honourable Keith Mitchell, has been  speaking further about the newly announced changes to the make-up of Grenada’s  Cabinet.

The Prime Minister has consistently stated that his mid-term Cabinet reshuffles are  intended to broaden the experience of Government Ministers and improve their versatility  in handling the affairs of the state, while at the same time, provide an opportunity for  Government to enhance its overall performance.

In a radio interview Wednesday morning, Dr. Mitchell was questioned further about the  rationale for reassigning the various portfolios.

With respect to the Ministry of Finance, Dr. Mitchell explained that while is it is the norm  for leaders to retain responsibility for finance, it is not the first time he has assigned that  portfolio to another minister.

The Prime Minister expressed full confidence in the capability of Honourable Gregory  Bowen who will assume responsibility for the Ministry of Finance, Economic  Development, Physical Development, Public Utilities and Energy.

He said, “Minister Bowen has long demonstrated his committment to hard work and the  overall development of the country. Over the years, he has worked very closely with me  on financial matters, especially those which involved highly technical issues. I am  confident therefore that he understands the ministry and is quite familiar with its  operations. He is also known for having a consultative approach to decision-making and  this is a key characteristic of a good leader.”

For the first time, the Prime Minister has added Youth Development to his portfolio. He  noted that, young people in particular are significantly challenged by the impact of the  COVID-19 pandemic as it has affected their education, their socialisation which helps to  build character, and their ability to participate in sports.

Dr. Mitchell said, “This is an opportunity for me to leverage some of my strengths for the  benefit of the nation’s youth. There are many levels on which I can relate to the youth  having worked as a professor with responsibility for imparting knowledge and as a  sporting enthusiast who has played competitively for several years. In addition, having  responsibility for ICT at the CARICOM level, positions me to create synergies between  ICT and youth development. Working together with Minister Kate Lewis, I envision greater  harmonisation of our existing youth programmes as well as the introduction of other  initiatives to further propel the development of our young people.”

The appointment of Honourable Peter David as Minister for Agriculture, Forestry and  Lands has been labelled a demotion by some, but Dr. Mitchell said such a notion is  laughable and an insult to the nation’s farmers.

He said, “Minister David is considered one of the more people-oriented ministers in this  administration and it make sense to have him bring that particular strength to the  agriculture sector and create a greater connection with farmers and other stakeholders. If you have been crying out for the Government to do more for agriculture and you put  someone like Minister David there who can help build the sector, how can you then say  he has been demoted? Further, it is an insult to the farmers because you are saying that  agriculture is not similar in rank to other ministries. That is not my concept of Government  at all.”

Referring to the appointment of Senator Norland Cox as the Minister for Infrastructure  Development, Transport and Implementation, Dr. Mitchell said, “Although he is not an  elected representative, as a senator, he has demonstrated the maturity, communication  and people skills required for the position. He is not afraid to ask questions and that is  certainly one of the strengths of a good leader – you cannot be afraid to seek support

when in doubt. People in certain positions tend to believe that it is not good to seek help  but only people of a certain level of maturity understand this actually strengthens them, and Minister Cox is that kind of person. I have no qualms about his ability to effectively  lead the assigned ministry.”

On the separation of Hospital Services from the general Ministry of Health, Dr. Mitchell  said it was critical to do so.

He explained, “One of the serious areas of weakness is that of hospital services and my  fellow leaders across the Caribbean agree that it is also one of the critical issues in an  election campaign. Hospital services is essentially about the life and death of individuals  and any weakness will be highlighted by the population. My opinion is that Minister  Nickolas Steele needed some support because that ministry requires enormous human  resources given the vast areas of responsibility. Minister Delma Thomas has consistently  demonstrated that she is a people person, compassionate and empathetic and therefore  a good fit for the job that involves caring for people. I expect we will see tremendous  improvement in the state of health care in the country.”

The changes in the ministerial appointments will take effect on Monday, October 5, 2020.