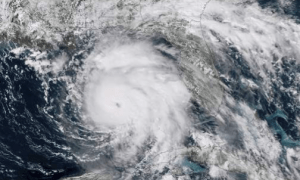 (CMC)— Residents in the Lesser Antilles were on Tuesday urged to closely monitor the movement of Tropical Storm Teddy that weather officials said could become a large and powerful hurricane over the next few days.

The Miami-based National Hurricane Center (NHC) said that the storm, which is about 1,030 miles east of the Lesser Antilles, has sustained maximum winds of 60 miles per hour.

The NHC said that while there are no coastal watches or warnings at present in effect, the centre of Tropical Storm Teddy was located near latitude 13.7 North, longitude 46.0 West.

“Maximum sustained winds have increased to near 60 mph with higher gusts. Strengthening is forecast for the next several days, and Teddy is likely to become a hurricane late today and could reach major hurricane strength in a few days,” the NHC warned.

Tropical Storm Teddy is one of several weather patterns affecting the region in recent days.

The NHC said that Hurricane Paulette, which scored a direct hit on Bermuda on Monday, was now moving further away from the British Overseas Territory and is gaining strength as it accelerates north eastward.

In its latest bulletin, NHC said that Paulette is 405 miles north east of Bermuda and is moving toward the northeast near 20 mph.