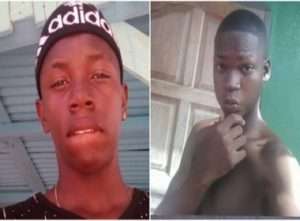 (LOOP NEWS CARIBBEAN) – Police in Guyana believe cousins Joel and Isaiah Henry were brutally murdered at another location before their mutilated bodies were dumped at the backdam in Cotton Tree, West Coast Berbice.

The Guyana Police Force (GPF) gave this update as it announced the release of all the suspects arrested in connection with the murders.

They were all given bail and are required to visit the Blairmont Police Station.

“The investigators are all actively following up every lead and information received from members of the public who have come forward to assist investigators.”

DNA samples have been collected from Joel, 18, Isaiah, 16, and all of the suspects.

Results will be given in three weeks.

GPF noted it is also searching for two additional suspects.

Joel and Isaiah’s bodies were found on September 6 hours after they were reported missing.

The boys had gone to Cotton Tree to pick coconuts.

Their killings sparked days of violent protests across Guyana.

Funeral services for the slain teens were held on September 13.