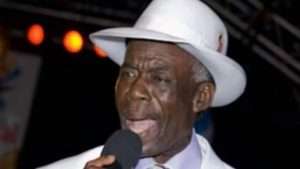 (LOOP NEWS CARIBBEAN) – Tributes are flowing for the Mighty Swallow who passed away at his home in Antigua and Barbuda on Friday.

Among those paying tributes are Trinidad and Tobago soca stars.

He wrote: “The Legendary Antiguan Calypso King was a mentor to us growing up and a great influence on my career. As a teenager and bandleader of Pranasonic Expres,  I remember his songs being a great part of our repertoire as they had heavy dominance in the music scene of Trinidad and Tobago. “ Fire in the backseat “ , “ Wine on something “ and of course “ The man with the Pepper Sauce is Boss”.

“He was a friend and inspiration to us all, soft spoken and humble . In this picture we stood side by side singing “ Now is the time “ the Calypso for Africa project at Rawlston Recording studio in Brooklyn New York back in 1985 . I had the privilege of spending time with him in December 2019 at Charlie’s Records along with Charlie where we sat and laughed about old times, he was just as humble and quiet . May he Rest In Peace and his legacy live on ! ??“ Don’t stop this Party”

In his tribute Bunji Garlin expressed condolences to the people of Antigua and Barbuda.

“Condolences to the family of Legendary Calypsonian King Swallow and such an important icon to the culture of the Caribbean. Solidarity with all of Antigua in this moment of the passing of an absolute gem of a talent,” he wrote on Instagram,.

He said: “I’m lost in words. Just last year we was performing in Antigua together laughing and having a good time. Condolences to your Family, Friends and Fans. King Swallow you will always be remember as a super star. Antigua Icon.”