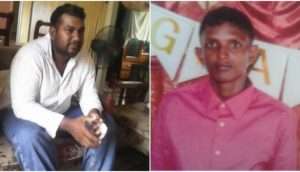 (GUYANA NEWSROOM) – The Guyana Police Force on Thursday announced that four persons have been arrested in connection with the murder of 34-year-old Pritipaul Hargobin who was beaten to death by protestors in Bath Settlement on Wednesday after he allegedly opened fire on them.

However, no one has been arrested for the murder of 17-year-old Haresh Singh who was also beaten to death and his motorcycle burnt on Wednesday morning in the backlands of Number Three Village, West Coast Berbice.

Both men are casualties in major protests that erupted on Sunday last following the discovery of the battered and mutilated bodies of 16-year-old Isaiah Henry and 18-year-old Joel Henry – two cousins who resided at Number Three Village.

Their bodies were found in Cotton Tree after they left home on Saturday to pick coconuts in the backdam.

The protests for justice turned violent in the past few days and resulted in many persons being robbed, beaten and properties burned down and damaged. Roads were blocked for several days.

Police Headquarters in a joint statement with the Guyana Defence Force Thursday night noted that the Chief of Staff (ag) and the Commissioner of Police (ag) visited the West Berbice area to meet the bereaved relatives of Joel and Isaiah Henry and to have a firsthand appreciation of activities on the ground, as well as to assess the issue of welfare of the ranks.

Subsequently, they met the relatives of the Haresh Singh,

“Additionally, based on the assessment of the operations, added resources were deployed to the West Berbice area in furtherance of the maintenance of law and order and facilitation of unhindered flow of traffic in the area.

“Further, despite attacks by protestors on members of the Joint Services, the ranks have been able to clear the stretches of roads that were blocked along West Coast Berbice and East Coast Demerara, which facilitated the free flow of traffic as of today, 10th September 2020,” the statement noted.

The statement further noted: “The Heads of Joint Services also wish to inform the public that the Police is in receipt of reports and evidence of assault on members of the public, and have since arrested three persons, and will continue in their efforts to arrest and prosecute others who were identified breaking the law.”

The Joint Services sought to reassure the citizenry that it will continue to maintain law and order and ensure the unimpeded flow of traffic along the West Berbice corridor.