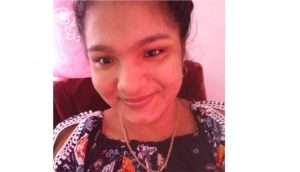 (GUYANA NEWSROOM) – Police are on the hunt for a man who stabbed his 24-year-old ex-girlfriend to death in a fit of rage on Wednesday night at Supenaam Public Road, Essequibo Coast.

Dead is Lunisa Peters; she was stabbed to the head and body and was pronounced dead on arrival at the Suddie Public Hospital. Police recovered a knife and a rolling pin with bloodstains at the scene.

The incident occurred at around 23:30h.

Investigation revealed that Peters and the suspect had a common law relationship and lived together until they separated; Peters moved out of the Golden Fleece home and moved to her aunt’s house at Supenaam.

It is alleged that the suspect visited the aunt’s house Wednesday night and was invited inside; he and Peters were sitting in a chair when her phone rang and she answered.

According to the Police, the suspect heard a male’s voice on the other end of the call and became annoyed; he snatched Peters by her hair and dragged her into the kitchen where he grabbed a knife, took her to the bathroom and dealt her several stab wounds.

Peter’s aunt heard the commotion, raised an alarm after which the suspect ran out the house and escaped.

Checks were made for suspect but he wasn’t found. Investigations are ongoing.