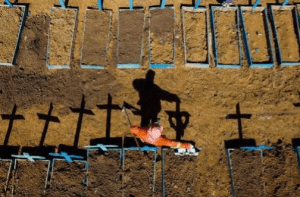 (AFP) – The global toll from the coronavirus pandemic has topped 900,000 deaths since it first appeared in China late last year, according to an AFP tally late Wednesday.

There have been more than 27.7 million confirmed virus cases worldwide, according to an AFP count based on official statistics, with the worst-hit region Latin America and the Caribbean, followed by Europe.

The country with the most coronavirus deaths is the United States with over 190,000 fatalities, followed by Brazil.

With billions of people around the world still suffering from the fallout of the crisis, a worldwide race for a vaccine is underway, with nine companies already in late-stage Phase 3 trials.

However clinical trials on one of the most advanced experimental COVID-19 vaccines, which is being developed by pharmaceutical company AstraZeneca and Oxford University, were “paused” this week after a volunteer developed an unexplained illness.