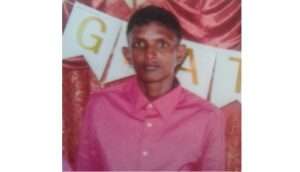 (GUYANA NEWSROOM) – A 17-year-old boy of Number 3 Village, West Coast Berbice (WCB) was on Wednesday morning murdered in the backlands as protests escalated over the murder of two teens Joel and Isaiah Henry.

The News Room understands that Haresh Singh was heading into the backlands with his motorcycle to transport water for his uncles at around 06:00h when he was attacked and beaten.

He was found by his 12-year-old brother with multiple injuries at around 11:30h. The younger brother was heading into the backdam to look after the family’s cows when he saw Singh’s motorcycle was torched and he decided to look for him.

The teen’s sister, Amrita Singh told the News Room her brother died on his way to the New Amsterdam Public Hospital.

Struggling to hold back tears, Amrita said herself and brothers live with their grandmother who is ill.