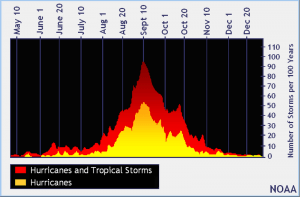 (KBTX) – Four days away from the climatological peak of the Atlantic Hurricane Season, the National Hurricane Center is monitoring multiple, westbound tropical waves.

Two of these tropical waves have been given invest numbers, tagged so that computer models can start running for them, and are expected to form into tropical depressions over the next few days.

The leading tropical wave marked as a red X above — Invest 92L — is expected to become a tropical wave sometime Sunday night or Monday. Following right behind it, thunderstorms coming off the coast of Africa have started to form a broad area of low pressure as they slide into the far Eastern Atlantic. Another tropical depression is expected to form there early-to-mid week.

At this time, neither of these two potential depressions are an immediate concern for the United States Coast. They will be something to monitor over the coming week. An area of low pressure moving west toward the Carolinas has a low chance for development over the next five days. Regardless of development, heavy rain will be possible there Tuesday and Wednesday.

Below are the details from the National Hurricane Center’s 1pm Sunday update:

• An area of low pressure located about midway between the west coast of Africa and the Leeward Islands is gradually becoming better defined. However, the associated showers and thunderstorms are still not well organized. Gradual development of this system is expected, and a tropical depression is likely to form tonight or on Monday while it moves westward or west-northwestward across the central tropical Atlantic. [Formation Chance: 90%]

• Showers and thunderstorms are showing signs of organization in association with a broad area of low pressure located just off the coast of western Africa. Environmental conditions are conducive for development, and a tropical depression is expected to form within the next couple of days while it moves generally westward over the far eastern tropical Atlantic. Interests in the Cabo Verde Islands should monitor the progress of this system as gusty winds and locally heavy rainfall is likely there Monday night and Tuesday. [Formation Chance: 90%]

• A tropical wave located over the central Caribbean Sea continues to produce disorganized showers and thunderstorms. Development, if any, of this system should be slow to occur during the next day or two while it moves westward across the central and western Caribbean Sea. After that time, unfavorable upper-level winds should limit its formation chances. [Formation Chance: 10%]

• A trough of low pressure located just southeast of Bermuda is producing disorganized cloudiness and showers. Some slow development of this system is possible during the next several days while it moves west-northwestward. [Formation Chance: 30%]

National Hurricane Center
The next storms to be named this season would be Paulette, Rene, Sally, then Teddy.