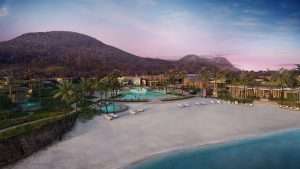 (newsday.co.tt) – Construction firm NH International (Caribbean) Ltd has won a US$21 million (TT$141 million) bid to be the main contractor for Grenada’s luxury Six Senses La Sagesse resort. Construction is expected to start in October and last 18 months. The two packages that have been awarded are for all earthworks/foundations and for all building structures.

NH has an established presence in Grenada, having just completed the renovations and upgrade of the Rex Resort into the five-star Royalton Hotel, part of Canada’s Sunwing Group.

In a release Thursday, Six Senses’ developer Range Developments said the development will create hundreds of jobs for Grenadians. The resort will be part of the luxury portfolio of Six Senses Hotels Resorts Spas. Range is a Caribbean property developer based in Dominica that uses money earned through citizen-by-investment schemes. Other projects include Park Hyatt St Kitts and the Cabrits Resort and Spa Kempinski, Dominica.

Grenada, the release said, has over recent months become “the citizenship-by-investment destination of choice for high net worth individuals”. Citizenship-by-investment programmes are controversial schemes through which high-net worth individuals can purchase passports from Caribbean nations in exchange for investment. Grenada Prime Minister Dr Keith Mitchell said the investment is much needed given the current economic challenges. “We look forward to the timely completion of this project and the creation of even more employment opportunities for workers in the tourism industry,” he said via the Range statement.

NH was also the structural contractor for Cabrits in Dominica. Emile Elias, NH executive chairman said the company was honoured to be part of the project.

According the release, the Six Senses La Sagesse, Grenada resort is a government-approved project under the citizenship-by-investment programme. Investors can obtain citizenship of Grenada through a US$220,000 investment in the Six Senses project. Initial sales momentum has been strong, the company added. The resort is expected to be completed in the fourth quarter of 2022.