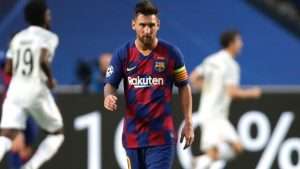 (AFP)— Lionel Messi said on Friday he will stay at Barcelona, insisting he could never go to court against “the club of his life” but he launched a stinging attack on president Josep Maria Bartomeu.

He accused Bartomeu him of going back on an agreement to let him leave for free at the end of last season.

“The president always said that at the end of the season I could decide if I wanted to go or if I wanted to stay and in the end he didn’t end up keeping his word,” Messi said in an interview with Goal, released on Friday.

The 33-year-old striker believed he had a clause in his contract that allowed him to leave for free at the end of the season but Barcelona said that option expired on June 10.

“I thought and we were sure that I was free,” Messi said. “The president always said that at the end of the season I could decide if I stayed or not and now they hold on to the fact that I did not say it before June 10 when it turns out that on June 10 we were competing for the league in the middle of this shitty virus and this disease that altered all the dates.”

Messi added: “And this is the reason why I am going to continue in the club… because the president told me that the only way to leave was to pay the 700-million-euro release clause.

“This is impossible, and then the other way was to go to trial. I would never go to court against Barca because it is the club that I love, that gave me everything since I arrived, it is the club of my life, I have made my life here.”

Messi had requested to leave the club he joined as a boy following Barcelona’s humiliating 8-2 defeat to Bayern Munich in the Champions League, with Manchester City emerging as favourites to sign him.

His lawyers sent Barca a burofax on August 25 stating his intention to depart but Messi says he made his feelings clear to Bartomeu long before.

“I told the club, especially the president, that I wanted to go,” said Messi. “I’ve been telling him all year. I believed it was time to step aside.

“I believed that the club needed more young people, new people and I thought my time in Barcelona was over, feeling very sorry because I always said that I wanted to finish my career here.

“It was a very difficult year, I suffered a lot in training, in games and in the dressing room. Everything became very difficult for me and there came a time when I considered looking for new goals, new horizons.

Barcelona ended the season without a trophy for the first time since 2008, which also extended Messi’s unsuccessful run in the Champions League to five years.

He has scored 634 goals and won 34 titles with the club that he joined as a 13-year-old and where he came through the ranks at La Masia.

Messi said his decision to leave left his wife and three sons distraught. “When I told my family that I could go it was a drama,” he said. “They all started crying.”

Despite his unhappiness at having to stay, the Argentinian insists he will give his all for the team next season under new coach Ronald Koeman, with his contract due to expire in June next year.

“I am going to continue at Barca and my attitude is not going to change, no matter how much I have wanted to go,” Messi said.

“I will do my best. I always want to win, I am competitive and I don’t like to lose ever.”

Messi was absent from pre-season training last week as he continued to try to force a move.

“I said before we couldn’t win the Champions League. Now I don’t know what will happen,” he added.

“There is a new coach and a new idea. That’s good, but then we have to see how the team responds and if it means we can compete or not. What I can say is that I’m staying and I’m going to give my best.”

It remains to be seen whether Bartomeu stays on as president, with his position seemingly untenable after such a heavy rebuke from the club’s greatest ever player.

Bartomeu reportedly offered to resign if Messi publicly said he was the problem and agreed to stay.

“It has been a long time since there has been a project or anything at all,” Messi said of the leadership at the club. “They are always juggling and plugging gaps.”