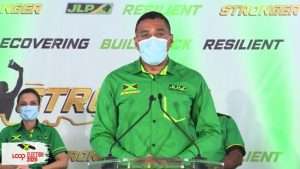 These are but some of the words being used to describe the massive landslide victory Prime Minister-elect Andrew Holness and the Jamaica Labour Party (JLP) inflicted on the People’s National Party (PNP) led by Peter Phillips on Thursday as Jamaicans voted in the country’s 18th parliamentary elections in the midst of the COVID-19 pandemic.

It marked the first time the JLP was recording back-to-back wins in a contested general election since 1967 when it retained power, having won in 1962.

The preliminary count showed the JLP winning 49 seats to the PNP’s 14 and came as no surprise as public opinions polls had predicted a big win for the JLP.

The PNP is now left in a quandary as its looks to rebound quickly from the trashing. The 70-year-old Phillips told reporters on Thursday that he would retire if he lost the elections. However, several of those in the second-tiered leadership who were in line to take over, including Bunting, also lost their seats.

Thursday’s elections saw the lowest ever voter turnout at just 37 per cent. The JLP secured 57.1 per cent of the vote while the PNP got 42.8 per cent. Some 406, 085 electors cast their ballots for the JLP while 304,372 did so for the PNP. Opinion polls had for months signalled that the JLP would win big and, in August, political commentator Kevin O’Brien Chang told Loop News that the party was on course to win 50 seats.

In his acceptance speech from the JLP’s Belmont Road headquarters in Kingston, Holness said he was humbled by the victory which he said was “for the people of Jamaica”. He said he will not stand for corruption in his government and he also said the party that presented the better manifesto won.

The JLP had scraped home by a single seat in 2016 and Thursday’s victory is an indication of the massive swing towards the party and an endorsement of its policies.

The count of general election victories now stands at nine each for the country’s two main political parties.

Of note is that none of the 13 independents who contested the election registered a win.

It is the second time that a general election was held on September 3 and the JLP has won on both occasions. In 2007 when then Prime Minister Portia Simpson Miller was forced to change the date of the election from August 27 to September 3 due to the passage of Huricane Dean, the Bruce Golding-led JLP eked out what was then the closet margin of victory at the polls by winning 31 of 60 seats.

PNP vice president Phillip Paulwell, who held on to his East Kingston and Port Royal seat, said the party will meet on Friday to discuss the loss. He told journalists that he was shocked at the margin of defeat and conceded that infighting may have played a part in the one-sided loss.