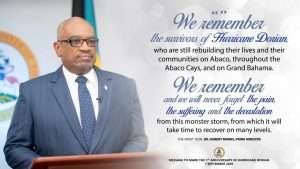 A day that has been written into the history books of The Bahamas as one of the worst in its history.

The day the territory was ripped to shreds, left an almost desolate wasteland in the aftermath of Hurricane Dorian.

Prime Minister Dr Hubert Minnis has renewed his commitment to restoring the lives and communities of those affected by hurricane Dorian.

In a national address which was broadcast on Tuesday, he dubbed September 1 a day of remembrance as he paid tribute to those who suffered losses and those who contributed to recovery and restoration efforts.

Prime Minister Minnis said grief is one of the hardest human experiences and offered condolences to those who lost loved ones during Hurricane Dorian.

“We miss our loved ones with a depth of sorrow so overwhelming that it is hard to bear. We remember the survivors of Hurricane Dorian, who are still rebuilding their lives and their communities on Abaco, throughout the Abaco Cays, and on Grand Bahama. We remember and we will never forget the pain, the suffering and the devastation from this monster storm, from which it will take time to recover on many levels.”

PM Minnis said Hurricane Dorian, which is still being described as one of the strongest storms ever recorded anywhere in the world, first struck Abaco a year ago with maximum sustained winds of 185 miles per hour, gusts of 220 miles per hour and storm surge in excess of 20 feet.

“The areas in Abaco and Grand Bahama struck directly by the storm looked lile war zones afterward. Dorian tore home from their foundations. It washed away businesses. Boats and containers were flung across neighbourhoods and business districts like pieces of paper in the wind,” he said.

The storm destroyed water, electrical, and telecommunications infrastructure which the Prime Minister said was built over several decades.

The territory, he explained, suffered in excess of $3.4 billion in losses that it’ll take time to recoup and rebuild

More than the physical damage Prime minister said are the life-changing injuries, mental trauma and loss of life suffered because of hurricane Dorian.

He said work to restore Abaco and Grand Bahama the two islands that were hardest hit has been done in tandem with communities and international partners.
While some progress has been made, PM Minnis said there’s a lot more to be done.

“When we saw the destruction Dorian caused, we immediately knew that no small island developing nation such as The Bahamas could respond on its own. We made the decision to welcome in the largest contingency of international partners in Bahamian history in response to this extraordinary natural disaster.”

The Prime Minister said it’ll take many years before Abaco and Grand Bahamas are fully restored and acknowledged the frustration this is causing residents.

He pledged that moving forward the government will keep the public informed of its restoration efforts.

“The hard and painstaking work continues to restore the devastated communities. As the Hope Town Lighthouse stood through Dorian, withstanding its winds and waves, the people of Abaco and Grand Bahama were not defeated by the storm. ”

Despite the losses suffered and the remarkable challenges that many still faces as a direct result of Hurricane Dorian Prime Minister Minnis noted with pride that the Bahamian spirit remained unbroken.

Because of this, he believes there is no challenge the Bahamian people can’t overcome.

“We must rebuild for a new time in our history as we address with resilience and fortitude the many effects of climate change, including more powerful storms and rising sea levels. I have no doubt that we will build back better. But, it will take time. Each time we faced a crisis in the past as Bahamians we put our heads down and got to work together – black and white, rich and poor, young and older. We are doing this again, even as we are also facing the many challenges of the COVID-19 pandemic.”

Prime Minister Minnis reaffirmed his commitment to do all he can to help restore the lives of those devastated by Dorian.

At least 70 people were killed when Hurricane Dorian decimated The Bahamas on September 1, 2019.