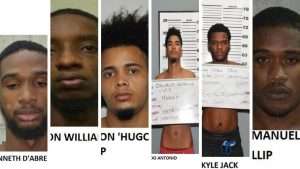 (TRINIDAD EXPRESS) – Four locals and two Venezuelans have been charged with the murder of Chinese national Xiangong Phang during a break-in at the Happiness Grocery at the corner of Eastern Main Road and Sixth Avenue, Barataria, on August 23.

The six have also been charged with robbery with violence and burglary.

The decision to charge the suspects followed a meeting with Director of Public Prosecutions (DPP) Roger Gaspard SC and advice received last Friday, police said in a statement yesterday.

They will appear before a Port of Spain magistrate via virtual hearing today.

• Hudson “Hugo” Phillip (a Venezuelan), 21, who lives in Morvant and Laventille;

• Oswaldo Anton Marano, (a Venezuelan), 25, who lives Morvant and Laventille;

Around 3.45 a.m. on August 23, several people broke into the Happiness Grocery and proceeded to the upper floor where seven Chinese nationals lived.

The intruders were armed with knives and cutlasses.

During the incident, several people were chopped and wounded.

Members of the North-Eastern Division Task Force as well as other police officers responded and held eight people.

Two of the suspects were later released.

One of the injured people, Xiangong Phang, was taken to the Eric Williams Medical Sciences Complex, Mt Hope, where he died.

The others were treated and discharged.

The intruders were handed over the Homicide Bureau of Investigations (HBI) where investigations were carried out.

The investigation was spearheaded by Senior Supt Joseph Chandool, ASP Douglas and assisted by Insp Maharaj.

WPC Mohammed of the HBI Region 2 laid the charges.