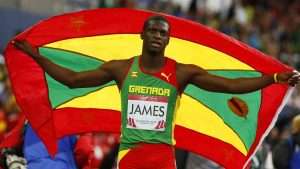 PR – The Ministry of Youth Development, Sports, Culture and the Arts, wishes to extend birthday greetings to World and Olympic Champion Kirani James as he turns twenty-eight (28) today, September 1st, 2020.

September 1st was designated as Kirani James Day in recognition of his historic feat in athletics. James captured Grenada’s first-ever Olympic medal after winning the Gold medal at the London 2012 Olympic Games – one of Grenada’s proudest moments at the World’s biggest sports stage. Prior to the 2012 Olympic Games, at the age of eighteen (18), he became the youngest World Champion in the 400 metres at the 2011 IAAF World Championships in Daegu, South Korea, where he defeated the defending champion LaShawn Merritt of the United States and, also, the winning 2011 Diamond League Trophy.

His remarkable achievements include, running the fastest time ever by a 14-year-old in the 400 metres earning him the nickname, “The Jaguar”; he was also the first athlete to become a double champion at the IAAF World Youth Championships in 2009 where he won the Gold medal in the 200 metres and 400 metres; running a personal best of 43.74 seconds in the 400 metres at the 2014 Diamond League in Lausanne; and he was part of the fastest 400 metres race ever ran in history, where the three leading men ran under 44 seconds at the 2015 IAAF World Championship in Beijing, China.

Today, we wish you all the best and God’s continued blessings for good health and improved performances, and we look forward to seeing you on the international stage in 2021 flying the national flag high.