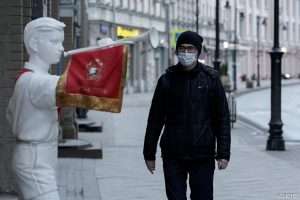 (AFP)— Russia surpassed the one million mark in total coronavirus cases on Tuesday as students throughout the country returned to classrooms on the first day of the new school year.

President Vladimir Putin was expected to address some 17 million students and more than 1.5 million teachers in an online lesson on World War II.

Schools across Europe are reopening despite the worries of many parents and teachers that the move could accelerate the spread of COVID-19 after leaders said their countries had beaten back the virus and eased restrictions.

Putin has repeatedly said that Russia has passed peak infections and the government eased most restrictions in June ahead of large World War II commemorations and a national vote on a new constitution.

The government’s anti-virus information website said this week that children would not be required to wear masks in the classroom, cafeterias or during lunch breaks.

But pupils will have their temperature checked on arrival, the head of the consumer watchdog Anna Popova said, adding that “no one can go to school if they are feeling even slightly unwell”.

In Moscow, the epicentre of Russia’s outbreak, masks are compulsory for teachers and recommended for students.

All school staff in the capital have been tested for coronavirus, the authorities have said.

Putin announced last month that Russia had become the first country to register a coronavirus vaccine, but scientists and the World Health Organization said it still needed a rigorous safety review.

Russia has registered 17,299 virus deaths, a low figure compared to other countries hit hard by the pandemic.

Critics have cast doubt on the low official mortality rate and accused authorities of under-reporting to play down the scale of the crisis.

Officials insist the low fatality count is down to a campaign of mass testing, which has identified many coronavirus cases with mild or no symptoms.