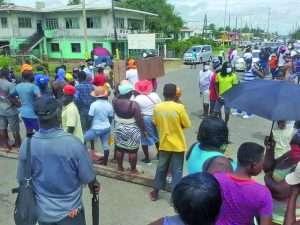 (CMC) – Three officials of the Guyana Elections Commission (GECOM), including the Returning Officer in Region Four, Clairmont Mingo, were on Monday released on bail after they appeared in court on various charges related to the disputed March 2 regional and general elections in Guyana.

Mingo was granted GUY$600,000 (One Guyana dollar=US$0.004 cents) bail when he appeared before Chief Magistrate Ann McLennan at the Georgetown Magistrate’s Court on four counts of alleged misconduct in public office.

One of his attorneys, Darren Wade told reporters that Mingo has to lodge his passport and report to the police every Friday at 9.00 am (local time) and will re-appear in court on September 25 this year.

The Chief Magistrate also granted GUY$150,000 bail to Information Technology Officer, Enrique Livan, charged with one count of fraud relating to the elections.

The prosecution alleges that between March 4 and 5, together with others, Livan while being an employee at GECOM, unlawfully altered the figures of the Statements of Poll, to defraud the State of Guyana.

He was not required to plead to the charge and will re-appear in court on September 25.  He was also ordered to surrender his passport and report to the police daily, staying at least 50feet from witnesses.

In another matters, Sheffern February, appeared before Chief Magistrate Ann McLennan on two charges of conspiracy to commit fraud.

According to .prosecution on March 13, with the intent to defraud the public of Guyana, while being a clerk at GECOM for District Four, she did not use figures from the Statements of Poll which resulted in a false declaration being made for the General Election. The second charge is the same but relates to the Regional Elections.

She was not allowed to plead to the charge and was granted GUY$150,000 bail on each charge, and is due to re-appear in court on September. 25. February was also ordered to surrender her passport and report to the police daily.

Mingo and three other GECOM officials have been in police custody since last week as the probe continues into the controversy surrounding the declaration of the results of the elections that GECOM later said had been won by the main opposition People’s Progressive Party/Civic (PPP/C).

The GECOM officials appeared in court as police continued their efforts at Belladrum, West Coast Berbice to end protest action by residents calling for the release of Mingo.

Police have confirmed that at least one person was shot and injured and a police officer also injured as the residents blocked roads and set fire to debris forcing a build-up of traffic.

On Sunday night, police used teargas and fired shots to disperse the crowd with the acting Commissioner of Police, Nigel Hoppie, confirming that the protest action is still continuing on Monday.

He said that a protestor was shot and several others, including a police man, were injured.